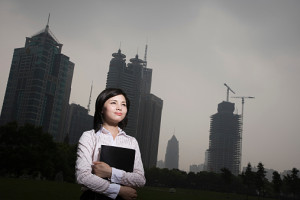 Air pollution is a serious problem in China. According to an article on Greenpeace East Asia, children grow up in Beijing, Hong Kong, and Shanghai with asthma and other respiratory diseases. Concentration of PM2.5 particles (particles with aerodynamic diameter less than 2.5 µm) exceeds World Health Organization guidelines in four cities – Beijing, Shanghai, Guangzhou, and Xi’an.

This high level of pollution creates serious health risks for residents of these areas. It affects the cerebrovascular and cardiovascular systems and increases the chances of cancer, birth defects, stroke, heart disease, weakened immune systems, and premature death.

As stated in the Greenpeace article, if the four cities with high concentrations of PM2.5 particles had met World Health Organization air quality guidelines in 2012, the number of premature deaths would have decreased by a minimum of 81%. The article also stated that an economic benefit of 875 million in U.S. dollars would have resulted from reducing those premature deaths.

As reported in a February 13, 2015 article on Reuters, a senior Chinese government official stated that China must cut its air pollution in half before any obvious improvement to the environment will be seen. China’s deputy environmental protection minister, Zhai Qing, said that pollutants had only been cut by a few percentage points since 2006 and that emissions will need to be reduced by another 30% to 50% for any significant air quality improvement to result, according to the article.

China’s economy is booming, and that creates an increasing demand for energy. That energy demand has been met by building new coal-fired power plants at a tremendous rate. Coal-fired plants produce 80% of China’s electricity, along with most of its air pollutants, from soot to sulphur dioxide, as covered in the Greenpeace article.

In November of 2014, according to the Reuters article, in order to improve air quality during the Asia-Pacific Economic Cooperation summit held in Beijing, severe restrictions were imposed on industry throughout northern China. Emissions in the area fell by 50% during the summit, as reported by Zhai Qing.

Greenpeace advocates a simple long-term solution to China’s air pollution problem: Stop using coal and fossil fuels and replace them with clean, renewable energy. It also advocates a number of intermediate air quality solutions for the short term, all of which would require that governments recognize the health and economic impacts of air pollution and take action immediately.

Among the short-term solutions proposed by Greenpeace are:

Whatever measures are undertaken, it is clear that China must take effective action to reduce air pollution as soon as possible. Not only is it costing the country billions every year in health care expenses and lost production, according to Greenpeace, but air pollution is taking an even more devastating toll on human life, health, and quality of living.

One thought on “China Must Cut Pollution in Half”