In the most comprehensive assessment of the effects of climate change to have ever been released, the United Nations recently issued a report that paints a startling and dire picture of the potential future of our planet. The report spells out in clear language that global warming is not a crisis that has been fabricated by liberals – it is real, and it is happening now. 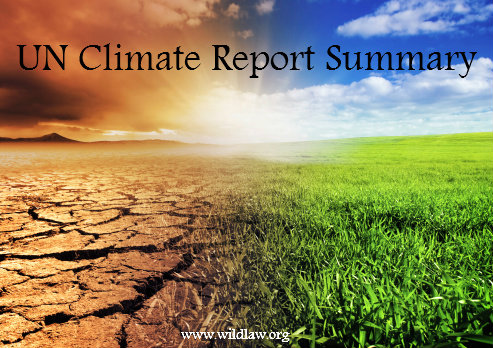 In order to ensure its accuracy, the report, which was written by the Nobel-Prize winning Intergovernmental Panel on Climate Change (IPCC), required the signatures of some 500 people ranging from expert authors to international government officials to independent observers prior to its Monday, March 31, 2014 release date.

The opening sentence of the report, which is entitled Climate Change 2014: Impacts, Adaptation, and Vulnerability, is the most ominous. It reads “Human interference with the climate system is occurring, and climate change poses risks for human and natural systems.” The report then goes on to highlight exactly what impact human interference has had on our planet.

The 44 page summary report of the same name, which was released to international policymakers and posted online, is easier to read, and, like the main report, it shows that climate change is responsible for the ongoing damage to crops and their yields, shrinking glaciers, species migration, an increase in natural disasters, and the spread of disease. Much of what is happening, and what is projected to happen down the road, is attributed to a global increase in temperature that has been caused in great part by greenhouse gas emissions.

The report authors indicate that the implications of said report are dire. The irreversible impact on species, the security of the world’s food supply, and the mortality of the human population as a result of natural disasters and starvation are all affected by climate change.

The report does offer a glimmer of hope by suggesting that there are ways in which we can adapt to these changes and mitigate future risk, but it also cautions that much of the damage has already been done and cannot be reversed. An obvious example of an adaptation that can help lower greenhouse gas emissions would be the creation and enforcement of stronger environmental laws. An example of an adaptation that would help protect us from the damage that has already been done might include building flood barriers, such as levees.

Can We Stop It?

According to the report, the answer to that question is not cut and dry. The United States, for example, is using less fossil fuel relative to its population than it has in the past, which of course is the goal. This is due, in great part, to strengthened governmental laws and regulations related to manufacturing, as well as state and federal incentives that encourage the purchase of hybrid, electric, and natural gas vehicles, energy efficient appliances, and energy-friendly home improvements. Of course, more can and should be done in both the commercial and private sectors.

More than ever, now is the time to do our part. For information on how you can help at the local and federal levels, please review the information on the following websites:

Unfortunately, other countries, including India and China, where the manufacturing sectors operate with less government oversight and fewer environmental regulations, make up for (and then some) the United States’ decrease in fossil fuel use. Until policymakers in those countries step up and make changes, our planet will remain in peril. But, that should in no way diminish our resolve to make positive changes because, through individual efforts on a massive scale we can still make a difference.

Coauthor of the UN report, Stanford University associate professor Noah Diffenbaugh, summed up our individual responsibility when he was quoted in an ABC News article as saying, “There are a lot of ways I know I can improve how much I am impacting the climate system, certainly the air travel, whether or not I leave my lights on, whether or not I ride my bike or take a short trip in the car, I know that all of these activities that I engage in end up contributing CO2 to the atmosphere and when we add all that up all over the world, that is what’s causing the global warming that we are very clearly observing.” In other words, we have no choice but to change our habits if we wish to combat climate change and guarantee the future of our planet.