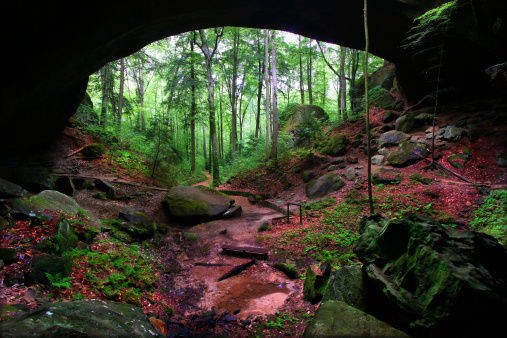 Alabama, from Caving to the Moon

Say “Alabama” and some country music lovers will point out the band of the same name, while others hum a few bars of “Sweet Home Alabama” by Lynyrd Skynrd. Either way, this state – which tops every alphabetical list of U.S. states – is also a top choice among nature lovers, and climate is the key.

With summer temperatures around 70 to 90 °F, and winter temperatures a sweet 30 to 50 °F, this southern state – original caspital of the Confederate Union in the American Civil War – owes it ecological diversity to the fact that it was geographically south of the last prominent glaciation (i.e., 110,000 years to 12,500 years in the past). Alabama was also, at some time in its geologic past, 66 percent under water, the site of a shallow, pre-Cambrian sea.

Thus, while other states remained smothered and frozen under ice, or under water, Alabama continued to add new plant and animal species to its highly diverse physiography – a diversity fully as extensive as that of the Piedmont (North Carolina) and the East Gulf Coastal Plain (Georgia).

Alabama Is a Grower’s Paradise

Lying almost entirely within zone 8, except for a northern swath of zone 7, Alabama’s growing climate is identical to that of Mississippi, Georgia, South Carolina and North Carolina, though the Atlantic Coast states offer a wider divergence of temperatures.

Alabama is also home to more than 4,000 caves, which encourage another kind of diversity – that of mammals, amphibians, crustaceans and insects and other invertebrates which have evolved to survive and escape predators in the damp, dark but thermally stable isolation of caves.

Most people, and even some growers, tend to think that the warmer the climate, the better things grow. This is far from the truth. Extremely tropical climates provide a rapidly growing over-layer that gradually blocks the sun, leaving the ground bare and the soil very shallow.

Temperate climates offer the best hope for plant diversity, and Alabama’s climate is precisely that. You couldn’t grow an apple tree in the Arctic because it is too cold, and the growing season too short. You also can’t grow one in the tropics, due to an apple tree’s need for some winter chilling to set fruit buds.

Alabama also has an abundance of the second-most important element to growth – water. Rainfall sometimes in excess of 55 inches per year provides water for 77,000 miles of rivers and streams – some persistent and others intermittent. It also supplies 563,000 acres of lakes, ponds and reservoirs and 3 million acres of sweet-water marshes. Not to mention 50 miles of coast containing not only salt marshes but 400,000 acres of estuaries providing transitional space from land to sea for all manner of aquatic and marine species.

This abundance of life in brackish waters, called “deltas” by the natives, demonstrates the highly productive nature of estuaries, and also their extreme fragility. This latter fact is what disturbs field scientists, who have found that these unique bodies of water can predict the degradation of a single species or an entire biome in ways that laboratory science will never be able to do.

As far back as human pre-history, people have chosen to live near these estuaries. In fact, two-thirds of the largest cities on earth are located on estuaries – a demographic that makes tracking species loss and ocean degradation even more immediate.

From Alabama to the …Moon?

For those who delight in arcana – little bits of interesting history or information – it’s fun to know that the first rocket to the moon was built in Alabama! Less fun but perhaps more relevant is the fact that Alabama, alone of all the states, now has all the raw materials and infrastructure to make iron and steel – an honor once shared with Minnesota, whose Iron Range in the 1880s extracted the taconite needed to build America’s railroads, ships and skyscrapers.