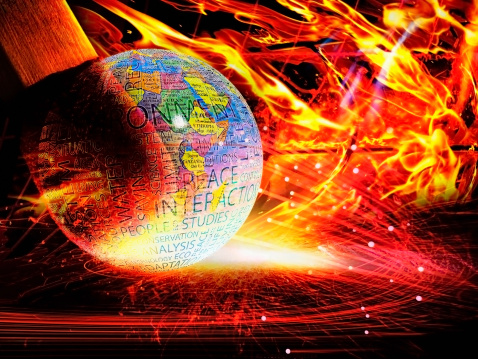 The very real and critically pressing issue of climate change continues to gain steam across all fronts. In a follow-up report to a similar study they released in 2007, an advisory board of retired U.S. military admirals and generals have now entered the fray to help sound the alarm. The current group of 16 three and four star generals, not surprisingly, have a unique take on climate change. Calling it a “threat multiplier” and a “catalyst for conflict”, they consider climate change to be a growing national and global security concern.

The retired officers served as the Military Advisory Board for, and worked with, the Center for Naval Analyses (a federally funded R & D center) to write and release the report, which is centered on the correlation between climate change and the potential for increased security risks. The report, aptly titled National Security and the Accelerating Risks of Climate Change, was publicly released on May 13, 2014 and immediately made international headlines.

The report’s authors offer multiple examples of situations where the effects of climate change, such as extreme weather and drought, have, and will, lead to prolonged food insecurity and lack of water, which leads to population dislocation, starvation and civil unrest. According to the report, climate change “will aggravate stressors abroad, such as poverty, environmental degradation, political instability and social tensions – conditions that can enable terrorist activity and other forms of violence.”

For example, it’s already happening in the Africa and the Middle East, where longstanding tension between ethnic tribes is being exacerbated by the fight over food and water. In places like the Mekong Delta, Bangladesh and India, the food and people are already at risk because of the rise in sea levels. Population dislocation in those areas will lead to millions of refugees moving inland, which will create tension and fighting over access to already scarce resources.

The Arctic region is a point of concern for the authors, too. They pointed out that, since the glaciers are shrinking, the Arctic will see an increase in international sea traffic. The issue is that a battle over turf may develop in the region because of the increase in traffic, as well as the fact that the Arctic is home to potentially 20 percent of our planet’s untapped natural gas and oil resources.

Fortunately, like the admirals and generals who assisted in preparing the report, those at the top level of the United States government are not climate change deniers, and are working to affect change within the scope of their powers. Unfortunately, climate change has long been a partisan issue, so push back by those in government who, for a myriad of reasons, refuse to support critically needed action, have made the process an unnecessarily slow and burdensome one. The good news is that top level officials are not taking no for an answer.

In an interview with the New York Times, John Kerry, U.S. Secretary of State, seemed to validate the accuracy of the report when he indicated that foreign policy in the United States is going to be directly affected by the events that the report projects will happen as a result of climate change. Secretary Kerry told the NYT “The intelligence community takes it seriously, and it’s translated into action.”

In the same interview, Mr. Kerry spoke of the tribes that already kill each other over water, and extended that thought to include the idea of “massive dislocation”, and the Nile, and major rivers of India and China “drying up”. Mr. Kerry’s acknowledgement that climate change is a critical security concern is also echoed by the Pentagon.

The Pentagon Weighs In

In a statement released by the Pentagon, John Conger, the Deputy Under Secretary of Defense for Installations and Environment, wrote the following: “The department certainly agrees that climate change is having an impact on national security, whether by increasing global instability, by opening the Arctic or by increasing sea level and storm surge near our coastal installations… We are actively integrating climate considerations across the full spectrum of our activities to ensure a ready and resilient force.” So, President Obama’s administration is on board, so are the military elite and the Pentagon. Now, the naysayers need to change course, or step aside so we can affect real change.

Though the report focuses on the security concerns surrounding climate change, it echoes a sentiment that is known all too well by the scientists who study climate change. The report warns that “The increasing risks from climate change should be addressed now because they will almost certainly get worse if we delay.” But, will a report written by 16 of the top military elite in the United States finally sway the opinions and change the minds of deniers and resistant politicans? It would be nice to say that ‘only time will tell’, but since we are fresh out of time, we have to force our representatives into action now.

The only way we have a chance to make a difference and, at the very least, slow down the effects of the damage we’ve done, is to collectively change our behavior – regardless of on which side of the aisle we sit. Do your part by contacting your local representatives and U.S. Senators. Find out where he or she stands on climate change, what they’ve done to affect change for your community, your state, and the nation as a whole. Let them know that it matters to you and that their action, or inaction, will impact your vote.

In the report’s summary, the authors wrote “Concern over the potential for climate change impacts on our national security – regardless of the cause – has diminished as a national issue, and politically charged debate has silenced sound public discourse.” Therein lies the biggest hurdle of all. We have no choice but to get out of our own way and stop making climate change a partisan issue. Climate change has no political or ideological affiliation. It affects us all equally and with impunity.