Since humans and animals share the same space on the same planet, unfortunately, that also means that we share the same fate when it comes to climate change, pollution, and other environmental game changers. So, it only makes sense that we would collaborate with each other and do what we can to slow the tide of environmental destruction and preserve our natural surroundings. That is exactly what we are doing, too. Working in partnership with humans, animals are helping us restore habitats, gather information about climate change, and track down waterway polluters. Here are just a few examples of the extraordinary ways that humans and animals are working together to protect our planet. 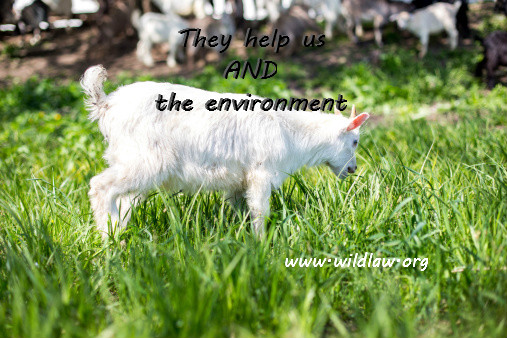 How’s this for an eco-friendly way to mow your lawn? In lieu of using lawnmowers, Google has rented goats to mow the lawns at their Mountain View, California headquarters. The goat-mowing technique has also been used to tame the grass and weeds in other locations, including the Congressional Cemetery on Capitol Hill and vacant lots in Cleveland. Goats have even been used to fight back against invasive weed species in Hyattsville, Maryland. Using a technique called Intensive Rotational Targeted Grazing (IRTG), and calling it “the first of its kind in the United States”, New York’s Department of Environmental Conservation is even developing a grazing procedure for all of its State lands.
Called “conservation grazing”, the act of using livestock to ‘mow’ lawns, fields, parks, wetlands, and other areas has been around for years. Other animals used in this endeavor include horses, cattle and sheep. Conservation grazing is an environmentally friendly, nondestructive alternative to using damaging machinery and/or pesticides to combat invasive plant species, clean up derelict properties, and restore natural habitats.

For years now, scientists have been using seals, sea lions and narwhals to aid in understanding and gauging climate change. In one successful example, narwhals, which are called the “unicorn of the sea” (due to their large tusk) and are native to Arctic waters, have been outfitted with thermometers to help scientists accurately measure the temperature of the waters in the rapidly warming Arctic, particularly near Greenland.
Prior to the use of narwhals, it was nearly impossible to precisely measure the water’s temperature in that area, but since narwhals can dive deeper than humans, the animals have assisted scientists in correcting their previously erroneous readings. As it turns out, climate change has impacted the waters in the Arctic a bit more rapidly than previously thought. The water is getting warmer, faster. In fact, the water is an additional .9°C warmer than human measurements had calculated.

In an ecological variation of the traditional drug detection dog training programs, organizations such as Conservation Dogs and Working Dogs for Conservation are training canines to track down contaminants and invasive species that are wreaking havoc both on land and in the waterways. For example, in Montana, dogs have been used to find scat from otters so conservationists can analyze it to assess the level of contaminants in the waterways. They look for pharmaceuticals, industrial agents, and the like so they can measure the water quality and potential risk to wildlife and humans in the area. The information is then used to track down the source of the contamination so it can be stopped. Best of all, partnering with dogs provides a noninvasive solution to the problem.

Fighting back against polluters and climate change, and discovering more environmentally friendly, nondestructive ways to tend to our land requires a joint effort. So, animals and humans are working together on many fronts to try to reduce and reverse the effects of environmental destruction and climate change.
Contact your state government agency to find out what your representatives are doing locally to combat climate change and pollution, and encourage them to switch to methods (such as goat mowing) that will have a reduced environmental impact. For better or worse, animals and humans are in this together.