No greater, or timelier, environmental concern impacts our nation right now than the proposed Keystone XL pipeline. Supporters of the pipeline argue, among other things, that it will create jobs, but post-construction there would only be 35 permanent positions to fill. Those who oppose Keystone XL provide a long list of valid reasons, but on the whole, they argue that the environmental destruction that would be wrought by the pipeline is too high a price to pay, and would cause irreversible damage to the environment.

In response to President Obama’s impending decision on whether or not to approve the pipeline, approximately 1,000 Keystone XL opponents showed up in force at the gates of the White House on March 2, 2014. As they protested the proposed pipeline, in hopes of raising public awareness and drawing the attention of the president, nearly 400 of them were arrested for civil disobedience. So, what is it about the Keystone XL that has so many people alarmed, and why are some so passionate about it that they would risk arrest? Is it really that big of a deal? In a word, yes.

First, the Keystone XL is no small undertaking. The Keystone pipeline already exists, but the new area being fought over is expansive. The pipeline, which would run from Alberta, Canada to near Steele City, Nebraska, is projected to be almost 1,200 miles long and pump out 830,000 barrels of tar sands oil a day. 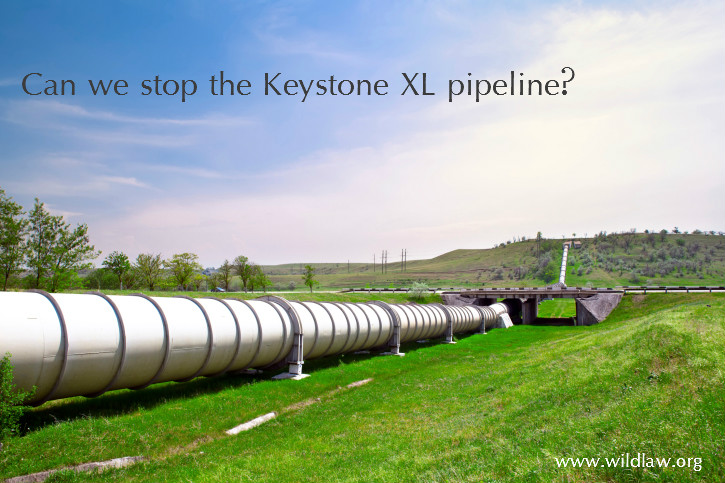 The potential environmental devastation that the Keystone XL would create along that route, and with that much oil, should be enough to give pause to anyone concerned about the environment. That is why Wild Law has prepared this brief snapshot into three of the most problematic issues related to the pipeline’s construction and implementation.

Conventional crude oil is much less carbon intensive than tar sands. In fact, in an April 22, 2013 letter from the U.S. Environmental Protection Agency to the U.S. Department of State, the issue was brought to light. In the letter, a portion of the Department of State’s draft impact statement is highlighted wherein it was determined that “lifecycle GHG emissions from oil sands crude could be 81% greater than emissions from the average crude refined in the U.S. in 2005 on a well-to-tank basis, and 17% greater on a well-to-wheel basis.”

The letter goes on to note that the difference could be even greater, and cautions that if GHG intensity of oil sands crude isn’t reduced, the pipeline could add as much as 935 million metric tons of additional CO2-e (carbon dioxide equivalent) to the environment over 50 years. To put that number into perspective, that would be like putting an additional 195 million cars on the road, or sending more than 350 million tons of waste to the landfill instead of recycling it. In order to offset that 935 million metric tons of CO2-e, nearly 24 BILLION tree seedlings will need to be planted and grown for 10 years. The additional CO2-e that the pipeline would add to the environment is the sticking point for many people, and it’s easy to see why.

The leak detection system that would be utilized for Keystone XL is only capable of detecting leaks at “a level of approximately 1.5 to 2 percent of the pipeline flow rate”, according to section 3.13.5.3 of the federal government’s Final Supplemental Environmental Impact Statement (SEIS), which was released January 31, 2014. When considering that 830,000 barrels of oil is the equivalent of 34,860,000 gallons of oil flowing through the pipeline every day, the detection system would not register a leak until well over 500,000 gallons of oil had spilled. Even then, according to the government’s impact statement, it would take 102 minutes for Keystone to detect the leak. By that time, however, the environmental damage will have already been done.

Since bitumen is heavier than water, once it spills into the water and the light petrochemicals used to dilute the bitumen are released into the air, the bitumen will sink to the bottom. Traditional countermeasures employed in standard spill responses won’t work because they focus on removing oil from the surface of the water. In fact, that played a big role in the impact from the tar sand spill in Kalamazoo. In that spill, the cleanup effort cost over $1B, yet three years later tar sands were still contaminating over 40 miles of the Kalamazoo River.

If the pipeline is built, it will cross in excess of 1,000 bodies of water, which includes several aquifers and 50 rivers or streams. One of the aquifers the pipeline would cross is the Ogallala Aquifer, which is one of the world’s largest underground freshwater sources. It spans 174,000 square miles, stretches between South Dakota and Northwest Texas, and serves as the water source for over one-fourth of the irrigated acreage in the U.S., as well as some of the largest grain cattle feedlots in the world. If that’s not enough, 80 percent of the people who live above the Ogallala rely on it for their drinking water. A bitumen leak would be devastating to not only the human, animal and plant life in and around the aquifer, but it would also wreak havoc on the one-fourth of our nation’s farmers who rely on it to feed their crops and animals.

If the pipeline is built, it will cross in excess of 1,000 bodies of water…

President Obama hasn’t yet set a definitive timeline on when he will announce the fate of Keystone XL. We do know, however, that a total of eight federal agencies have until May 2014 to review and respond to the SEIS. After the responses have been submitted, the Secretary of State will then submit his recommendation, after which President Obama will make the final decision.

The choice he makes related to Keystone XL will have a significant impact either way on his legacy as the environmental president and, more importantly, the environment itself. If you oppose the Keystone XL pipeline, as we do here at Wild Law, consider signing one of many online petitions that are available through organizations such as the Natural Resources Defense Council (NRDC), MoveOn.org, and Change.org.