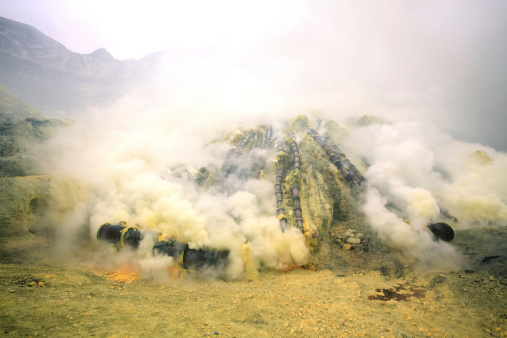 Mexico issued a binational alert earlier last week for both Mexico and the United States, advising of contaminants that continue to pollute the waterways surrounding the Buenavista copper mine in Cananea, which is in the northwestern state of Sonora. It’s the second spill reported from the same mine since just last month. The mining company’s behavior in the first incident has led to division and a lack of trust between the government and Buenavista officials, and that is hampering efforts to stop the spill and begin clean up.

What Happened at the Mine?

According to Mexican authorities, the spills were a result of construction defects and the Buenavista mining company’s lax supervision, although mining officials dispute that claim. The spills, according to mining officials, were a result of excessive rains brought by Hurricane Odile that caused storm water overflow. However, since the government has accused mining officials of lying about the first spill, as well as their efforts to clean up the impacted waterways, there is a lack of trust between the two entities that threatens progress.

Buenavista has now prohibited government officials from accessing the site, blocking investigators from being able to assess Buenavista’s property, equipment and actions related to the second spill. In response, Carlos Arias, director of the state civil protection agency, has said that Sonora state officials will return to Buenavista aided by security forces. Government representatives now claim to be considering permanent closure of the mine.

Why Do We Care?

Aside from eliciting the normal frustration and concern that comes with this kind of news, why does this event matter to the United States? Simply put, it’s the location. The hazardous spill, which caused a 40-mile stretch of the Sonora River to turn orange, occurred only about 25 miles from the United States border. In fact, according to an online article posted by the Associated Press, water in southern Arizona’s San Pedro River is currently being tested to determine if it’s been contaminated as a result of the latest Buenavista spill.

In addition to the knowledge that the spill may have crossed national borders, there’s another reason we should be paying attention to this situation. The company that owns the mine claims it has resolved the initial problem. However, since Mexican environmental authorities are barred from the property, they cannot confirm that claim. They are understandably skeptical considering there is now a second spill. We should be, too, because if this is allowed to continue, United States waterways will most certainly be impacted.

How Did it Start?

According to Mexican government officials, the precipitating spill occurred August 7, 2014 as the result of negligent supervisors and a faulty holding pond at the Buenavista copper mine in Cananea, Sonora. In that event, about 10 million gallons of sulfuric acid leaked into parts of Northern Mexico’s Sonora and Bacanuchi river systems. In the aftermath of the massive toxic spill, local citizens reported dead cattle and fish, 88 local schools were closed for about a week, and 800,000 people were adversely affected. That spill ended up being one of the biggest mining-related environmental disasters in Mexico’s history.

The sheer volume of sulfuric acid that spilled should have been enough for the mine’s management team to report the problem immediately. However, that’s not what happened. The management waited almost a full day before reporting the incident. While the company was within reporting guidelines, a spill of such magnitude needed to be addressed right away to minimize the impact to the safety and health of the area’s people, wildlife and the environment. It is the apparent lack of transparency and concern on the part of the mining company that has troubled local authorities.

Mexican officials blame the original spill on construction defects and lax supervision, and, if their assessment is correct, then we are right to be deeply concerned. It is unsettling enough that the Buenavista mine company continues to operate and release toxins into the waterways, and the Mexican government has had to threaten them in an attempt to gain access. Obviously, no company should be allowed to remain open for business when they so egregiously disregard their responsibilities and cause such destruction across the board. But, now that the contaminants have potentially made their way into our water supply, the issue is even more pressing and must be addressed from our side of the border.

We need to hold mining companies responsible for their actions, and not just those in the United States. Contact your local state representative and make sure he or she is aware of the Buenavista mining disaster. Find out what it is they’re doing to hold foreign mining companies accountable for the environmental destruction they’re causing in our own backyard.