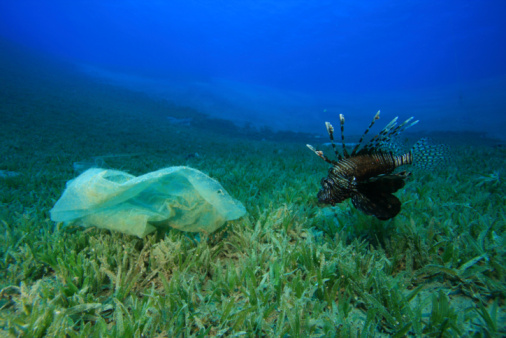 An estimated 270,000 tons of plastic pollute our world’s major waterways, according to the results of a new study. The report indicates that in excess of five trillion pieces of plastic are floating in our oceans, and some of that plastic gets ingested by fish that end up being eaten by humans. Not only is marine life being poisoned, but humans may very well be, too, given that plastic can contain harmful chemicals. So, it’s an urgent environmental, marine life, and human health issue.

The study, led by Marcus Eriksen of the Five Gyres Institute, and posted on PLOS ONE, involved scientists from countries including France, New Zealand, Chile, Australia, and the U.S. The various teams collected the data over the course of 24 expeditions in six years, and it is considered to be the most comprehensive study of its kind to date.

Where is All the Plastic?

Researchers surveyed the coast of Australia, the Indian Ocean, the Bay of Bengal, and the northern and southern sections of the Atlantic and Pacific Oceans. The plastic in our waterways is a worldwide problem, but seems to accumulate in five gyres, including one area of the Pacific Ocean that is so well known for its amassed plastic that it is called the “great Pacific Ocean garbage patch”. Australian researcher Julia Reisser said that travelling in such trash-infested waters was akin to wading through ‘plastic soup’.

How Did It Get There?

The answer, of course, is that the plastic ends up polluting our oceans and other waterways because humans put it there. According to the Natural Resources Defense Council website, “around 80 percent of marine litter originates on land, and most of that is plastic.” The reason? Only about 5 percent of all plastic gets recycled, with most items being used only once before being discarded.

What Can You Do?

The release of the report should be a call to action for everyone, on individual, governmental and corporate levels. On an individual level, there are a number of simple things we can do to help reverse this damaging trend. One way we can make a big difference is by simply following the adage “reduce, reuse, recycle”. For example, the more people who take their own bags to the store and recycle at home, the bigger the impact it will have on the environment. But, that’s still not enough.

We also need to minimize or eliminate altogether our use of disposable plastics, and purchase more items made from recycled material. The more environmentally-friendly purchasing decisions we make, the more impact we’ll have on manufacturer’s decisions when it comes to how they package products, and the materials they use when manufacturing them. Companies are profit-driven, so when we stop giving them our business en masse they will listen.

In addition to recycling at home and changing our personal buying habits to affect changes in the manufacturing sector, we must also pressure the government to enact stricter anti-pollution and recycling laws. Myriad states have enacted laws related to everything from an outright ban on plastic bags in stores to mandating that stores provide recycling bins for such bags. But, not all states are on board, and it’s not enough to only legislate the use of plastic bags.

Contact your state representatives, as well as the manufacturers of your favorite products. Let them know about the report, and find out what they’re doing to mitigate the problem of plastic in our oceans. Then, speak with your wallets and your votes. The situation is critical because, without our waterways, we won’t survive.

One thought on “‘Plastic Soup’: What Have We Done to Our Oceans?”