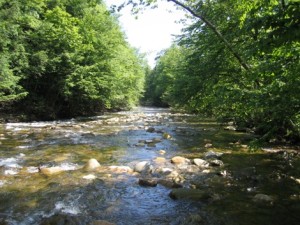 Tucked away in Western North Carolina, where it starts in a ravine between the Blue Ridge Parkway and the eastern side of the Black Mountains, North Carolina’s beloved South Toe River came close to having its natural splendor altered in 2005. Fortunately, conservation groups stepped up in hopes of preventing such an action, and they were victorious. In response to the efforts by said conservation and environmental organizations, District Ranger Paul Bradley withdrew the South Toe River rehabilitation project before it ever got off the ground.

The original project had called for the re-routing of a portion of the South Toe River in order to redirect flow away from Forest Service Road 472, which was undercut severely due to rainfall from tropical storms in 2004. The South Toe River is a renowned trout fly-fishing area, and is specially protected by the state as such.

In the ensuing years since Ranger Bradley withdrew plans for the rehabilitation project, South Toe River has retained its natural, uncompromised flow, and continues to be a popular regional fishing destination. Since it is tucked away between the Blue Ridge Parkway and the Black Mountains, the river doesn’t experience any pollution from commercial or residential runoff. So the waters remain pristine and healthy year round, which adds to its appeal.

Another reason the South Toe River remains such a popular fishing destination is that, because there has been no change due to re-routing of the water flow, the area’s indigenous fish species remain undisturbed, plentiful and varied. The upper section of the river, which extends from the headwaters to the local Black Mountain Campground, is home to rainbow, wild brown, and brook trout. The lower section of the river, which runs through the Yancy County Recreation Park and is close to the campground, is a fly-fishing only, catch and release area that spans about a mile in length. It is also an area that is supported by the local hatchery.

In addition to fishing, the South Toe River area offers a variety of outdoor activities and two campgrounds, as well as privately owned cabins for rent. Families and fishermen alike can choose between the Black Mountain Campground and the Toe River Campground. Anyone interested in outdoor activities other than fishing can participate in hiking, biking, tubing, and whitewater rafting on and along the South Toe River.

Those who prefer to be pampered in the great outdoors, can check into the Toe River Lodge. They even offer canopy zipline adventures, disc golf and rock climbing.

The South Toe River is home to more than just a bountiful variety of trout. A lot of wildlife call the surrounding area home, as well. Nature lovers may just catch a glimpse of a wild turkey or two, and perhaps even some deer or a black bear. Thanks to the diligent efforts of the conservation groups who take an active interest in preserving the natural environment for such animals, their habitat remains undisturbed by change and they continue to thrive in the area.

The success of conservation groups in preserving the natural state of the South Toe River may seem like a small step to many. However, for those who enjoy fishing, camping and exploring the area, the actions taken by such groups are appreciated, and to the wildlife who call it home, those actions are a significant lifeline. In fact, their efforts may very well have helped to preserve the South Toe River for years to come.

One thought on “South Toe River in North Carolina Protected”