On Tuesday, April 29, 2014, in a 6-2 decision (Justice Alito recused himself), the Supreme Court dealt a decisive blow to coal-fired power plants in more than two dozen Southern and Midwestern states. The victory, considered to be a major win for the Obama administration, supported the 2011 EPA Cross-State Air Pollution Rule that targeted harmful emissions from coal-fired power plants. 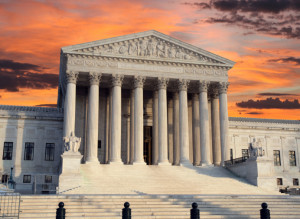 The Case at Hand

The sides for this case were drawn along predictable lines. Attorney generals from 14 states, along with corporations and groups, including Edison International, United Mine Workers of America, Entergy Corp, and AEP, challenged the EPA’s original move. They took it to court where, in 2012, a federal appeals court agreed with them. The case then headed to the United States Supreme Court.

Since then, the case, Environmental Protection Agency et al v. EME Homer City Generation, LP, et al, has been closely watched by environmentalists, impacted states, and the energy industry alike. Put in simple language, the Supreme Court disagreed with the 2012 decision handed down by the U.S. Court of Appeals for the D.C. District. The District Court had previously concluded that the Clean Air Act prevented the EPA from including cost and other indicators when assessing the extent to which emissions should be reduced by plants in upwind states for the sake of downwind states.

Of course, the Supreme Court had its dissenters. Justices Antonin Scalia and Clarence Thomas both sided with the power plants. Unfortunately for Justice Scalia, his argument was flawed, and it was an error that was quickly noted by many news outlets. In his dissent response, Scalia wrote the following:

“This is not the first time EPA has sought to convert the Clean Air Act into a mandate for cost-effective regulation. Whitman v. American Trucking Assns., Inc., 531 U. S. 457 (2001), confronted EPA’s contention that it could consider costs in setting NAAQS.”

The flaw in his statement is that, in fact, it was not the EPA that argued in favor of adding cost considerations. It was the petitioner. Worst of all, Scalia was the author of that Supreme Court decision, so he should have known. Clearly, Scalia’s dissent was born from erroneous information, but fortunately, he was in the minority.

A Win for the People and the Environment

Those who sided with the dissent of Justices Scalia and Thomas, including Virginia, Ohio and Texas (‘upwind’ states), and some industry groups and utilities, were clearly no match for the logic of the Clean Air Act. In the response for the majority, Justice Ruth Bader Ginsburg wrote that they were simply following the “plain text” of the Clean Air Act in validating the cross-state rule (or, Transport Rule). In other words, dissenters were grasping at straws and should have probably read and discerned the Clean Air Act before taking a stand.

Those ‘upwind’ states, along with some major industry and labor groups argued that the EPA should allow them an opportunity to draft their own emission-cutting plans. Not surprisingly, Justice Scalia agreed, criticizing the EPA for not allowing the states a window of time to reach attainment before instituting a federal plan. Wisely, that argument was rejected by the majority of the Supreme Court who stated that the EPA was under no legal requirement to allow such a move. Besides, those groups have had years to do the right thing, but instead have put profit over the environment.

In an effort to point out the lax attitude on the part of the ‘upwind’ states, the justices wrote that the ruling is “equitable because, by imposing uniform cost thresholds on regulated States, EPA’s rule subjects to stricter regulation those States that have done less in the past to control their pollution.” In other words, enough is enough.

In addition to attempting to minimize the destructive impact their stalling tactics and blatant disregard have had on the environment, those who disagree with the Supreme Court’s decision, have shown little if any regard for the health of the people who have been subjected to the pollutants the power plants have been relentlessly pumping out. When the nitrogen oxide and sulfur dioxide pollution from those power plants, which travel long distances once released into the environment, react with other substances in the air, soot and smog are formed. Research proves there is an undeniable link between exposure to such pollutants and illness.

According to the EPA, this new ruling will prevent hundreds of thousands of illnesses and in excess of 30,000 premature deaths annually. The Supreme Court’s decision was a boon for the “millions of people who suffer from serious health problems caused by the soot and smog-causing pollution from power plants in other states”, according to the Natural Resource Defense Council’s clean air program director, John Walke.

The consequences of the Supreme Court decision will have irreversible repercussions for the impacted power plants. Many of the coal-powered plants will have to shut down permanently because they would be forced to install additional pollution-control systems. In fact, it’s been reported that more than 30 coal-fired power plants are going to have to close, and another 36 may follow. View this interactive map at www.governing.com for specifics. While jobs will be impacted, it is difficult to drum up sympathy for an industry that has for years willfully and brazenly put profit ahead of the environment and the lives of people.

Those who oppose the ruling wonder where they’ll get their energy and why the Supreme Court ‘opposes’ business, but those are empty concerns, meant to drum up emotion, and cause panic and division among those who don’t have the facts.

So the coal industry feels threatened by this ruling. It should. Coal is an antiquated form of energy that, by the way, pollutes the environment at every step of the process: mining, transportation, storing, and burning. It is common knowledge that coal plants are the number one producers of carbon dioxide in the United States. As we know, carbon dioxide is the main cause of global warming, and it is a leading cause of toxic air pollution, acid rain, and smog. In 2011 alone, United States coal plants produced 1.7 billion tons of carbon dioxide.

The most disheartening factor in it all is that coal-fired power plants have the ability to greatly reduce the damage they cause, but they have deliberately chosen not to install the necessary carbon capture, utilization and storage (CCUS) technology. Why? Profits would be impacted. Fortunately for us, the Supreme Court has stepped up and done what environmentalists have been trying to do for years – hold them responsible for their actions. The Supreme Court decision is clearly a win for everyone, but still, it’s a sad testimony that the coal industry had to be forced to stop killing people, making them ill, and destroying the environment.