In an effort to diversify content, I’ve decided to create a spotlight at Washington DC and its bike friendly culture: 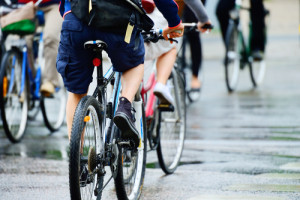 These days, it seems that every city, big and small, wants to be “bike friendly”. Seems easy enough to put in a few bike lanes, open a bike shop, and promote helmet use. Many communities think that’s enough and an automatic “in” on the long list of bicycle friendly cities. While these are great steps at bringing bicycle awareness to a community, bike friendly cities aren’t created overnight.

Take a look at the ever popular bike friendly city, Amsterdam. In the 1950’s, cars were a popular mode of transportation until the Middle East Oil Crisis arrived and too many pedestrians and bicyclists were killed by cars. Bicyclists in Amsterdam quickly became a priority and to this day have the same rights and responsibilities as other motorists. In fact, bicycles are more popular than cars, making the streets a bicyclist’s paradise. So, Amsterdam has all the makings of a bike culture, but guess what? So does DC.

What Makes Up a Bicycle Culture?

Bicycle culture is more than a general appreciation of bicycling or riding around on a lazy Sunday afternoon. Bicycle culture focuses on the safety of bicyclists and the harmonious relationship between bicyclists, motorists, and pedestrians. DC ranks in the Top 5 of Bicycle Magazine’s “Bicycle Friendly Cities” as well as “America’s Fittest City” (which can be partly attributed to the thriving bicycle community). DC is a “Bicycle Friendly City” because:

In reality,even in the friendliest of bicycle cities, accidents with vehicles are always a possibility, particularly when drivers and bicyclists share the road and are treated as equals. Unfortunately, even in cities with a large bicycle population, other motorists may continue to be careless and clueless.

“A driver who operates a vehicle without a reasonable level of concern for the safety of others has acted in a negligent manner, which can give rise to a legal claim,” says Mani, Ellis, & Layne. Bicycle advocacy groups are well versed in road rules and can be an ally if you’ve been struck by a negligent driver. DC bicycle culture may not be as established as some other cities, but it’s a worthy competitor and getting closer each day.