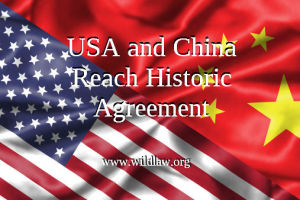 Earlier this week, in an unprecedented display of cooperation on the environment, President Obama and China’s President Xi Jinping announced a joint effort to reduce greenhouse gas emissions. It’s a particularly significant move considering that the United States and China alone are responsible for more than one third of the world’s greenhouse gas emissions. The joint effort by the world’s two largest single-state economies is also a rallying cry to other countries that the environment is worth fighting for, regardless of partisan politics.

The United States will now essentially double down on its efforts to cut CO2. Prior to the new agreement with China, the United States was on track to reduce carbon pollution by 1.2 percent annually between 2005 and 2020. The new goal accelerates reduction efforts so that, between 2020 and 2025, the decrease will fall between 2.3 and 2.8 percent a year. According to a White House press release, the new goal “is grounded in intensive analysis of cost-effective carbon pollution reductions achievable under existing law”. The change also keeps the U.S. on track to achieve its goal of an 80% reduction by 2050.

Even more stunning than the breakneck pace of CO2 reduction efforts in the U.S., in a first ever move, China has now agreed to a peak date for its CO2 emissions. President Jinping announced that China will work to peak CO2 emissions by 2030, but hopes that they can peak even earlier. As part of their plan, China aims to increase its nonfossil fuel energy use to approximately 20%. The country plans to reach that goal by 2030.

What the agreement means for China’s recent entry into the controversial coal-based synthetic natural gas (SNG) market remains to be seen. Nonetheless, it’s a positive step for a country with an environmental record so historically abysmal that pollution levels have given rise to nicknames like “airpocalypse”. Prior to this announcement, China had been undertaking efforts to combat pollution, but even so, nearly all of China’s cities still fail to meet air quality standards.

When the United States and China stood together to make the historic announcement, they sent a clear message to other industrial powerhouses, such as Brazil and India. That message? Cut the politics and join us. Prior to the announcement, other industrial states pointed to ineffectual action on the part of the U.S. and China as a reason they don’t need to take action to improve their own environmental records. Now, however, there will be institutionalized pressure for those countries to join China and the U.S. in their efforts. Obviously, that’s a good thing, as the pressure will have a top down domino effect, beginning with the leaders of each respective country and trickling down to international investors.

The agreement between the United States and China is truly historic, and shows what a grassroots effort can achieve. Those who were once labeled as alarmists for daring to project the demise of our planet have worked tirelessly for decades to bring the truth to light. Finally, it appears, the world is listening.