In a study just released by the United Nations Intergovernmental Panel on Climate Change (IPCC), researchers project that until the year 2030 urban areas around the world will grow by a total of nearly 42 square miles every day. To put that daily growth into perspective, 42 square miles is the equivalent of about 20,000 United States football fields, or nearly twice the size of the city of Manhattan. Why are our urban areas growing at such an alarming pace? The answer, of course, is that more and more people are being drawn to the conveniences offered by such areas. 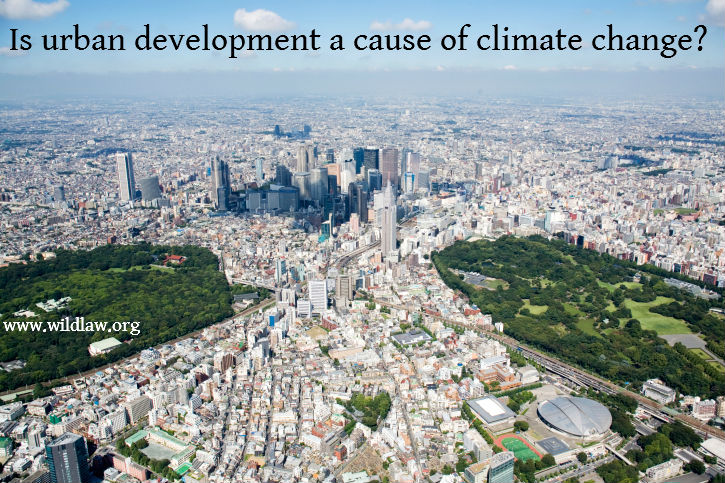 In 2011, an estimated 52% of the world’s population lived in urban areas, but by 2050, that figure is expected to increase to as high as 69%. That will be a little over two-thirds of the world living in urban areas. Of course, along with the growth in the size and population of urban areas comes more environmental destruction and accelerated climate change.

Certainly there are exceptions, but until recently, city planners haven’t focused much of their energy on environmental considerations. Since data isn’t available from every urban area in the world, it is difficult to pinpoint exactly how damaging urban areas are to the environment. However, the World Bank estimates that as much as two-thirds of the planet’s energy consumption can be attributed to cities. As urban areas grow, so will their energy use and emission of greenhouse gases.

The UN study states that in order to limit the planet’s rise in temperature to 3.6°F above preindustrial levels (which is an urgent goal), greenhouse gas emissions need to be slashed between 40% and 70% by the year 2050. Further, greenhouse gas emissions have to be brought down to nearly zero by the year 2100. Why 3.6°F? That number is considered the benchmark to avoid a further escalation of natural disasters, such as floods, heat waves and rising seas.

If as much as two-thirds of the planet’s energy is consumed in our urban areas, a key to slowing climate change is in structuring future urban growth to limit energy requirements, and to focus on how those areas are powered. That way, greenhouse gas emissions will be reduced as well. Rethinking city planning may be a solution, but it also poses a problem.

In their Summary for Policymakers, the IPCC notes that “Actions that range from incremental steps to transformational changes are essential for reducing risk from climate extremes.” Of course, the general concern is that mitigating the climate change is going to present an unprecedented institutional and technological challenge across the board, from builders and developers to energy providers and government entities. Everything from public transportation systems and shopping centers to schools and homes will need to be planned with climate change in mind. We have no choice, but fortunately there is still time to act.

Planning for the Future

Yale University professor, Karen Seto, who coauthored the section of the IPCC study that focuses on city planning, said “There is a window of opportunity” that is still open. Since much of the urban growth that is projected has not yet been planned, there is a call for an escalation of dialogue between city planners, urban designers, scientists, and environmentalists. The study offers several key insights into how urban planning should look when focused on reducing GHG emissions.

For example, the study suggests that “mutually reinforcing policies” would benefit the end goal. This includes building dense residential, educational, financial, retail, social, and employment areas near one another to reduce traffic. Additionally, diversifying land use, such as building mixed residential and retail structures, will help reduce traffic, as well as energy requirements. Apartment and mixed use (residential and retail) buildings require significantly less energy to operate than standalone homes and businesses.

People will live and work closer to their destinations and public transportation will always be available. So, along with the energy that is saved by the building of multiuse properties, emissions from vehicles will be greatly reduced. If the description sounds a lot like today’s urban areas, that’s because there are many similarities. But, there are also a couple of important twists, including the suggestion of mixed use buildings, which aren’t as common as they should be in cities. Additionally, the way those buildings and urban areas are powered is obviously an important consideration when working towards reducing our impact on climate change.

The IPCC report offers insight into what its authors consider to be a better way to provide the needed energy supply, at least in the short term. While many environmentalists don’t support the use of natural gas, the authors of the IPCC study suggest the use of natural gas plants to help power these burgeoning urban areas. Of course, that is as long as “the fugitive emissions associated with extraction and supply are low or mitigated”, according to the study. They consider natural gas to be a “bridge” technology that can be utilized until renewable energy sources become the mainstream.

Speaking of coal energy, the IPCC study also endorses the elimination of fossil fuel subsidies as a way to help reduce emissions. It would also be a way to nudge energy providers toward the future and to make them more culpable for their role in climate change. The hope is that if energy providers are no longer being rewarded for maintaining the catastrophic status quo, they will naturally focus on developing more environmentally sound renewable energy sources.

Our urban areas, which consume as much as two-thirds of the world’s energy, are growing exponentially. Responsible and environmentally sound city planning is instrumental to the health and future of our planet. But, so is the way in which those urban areas will be powered. What is needed is for our world’s energy providers and urban planners to work independently and collaboratively with an eye on the environment. As the IPCC report indicates, it will require “transformational changes” across the board. But, there really is no alternative, because they hold the key to the health and future of our planet.