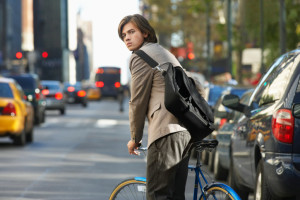 The benefits of bicycling as have been widely acclaimed in recent years by city governments and bicycling and health organizations. Although these benefits are undeniable, commuters considering the switch from driving to bicycling need to know about the disadvantages as well as the advantages.

Bicycling advocacy organizations, such as the Virginia Bicycling Federation, have worked to promote bicycling for transportation, to improve safety and convenience, and to change public policy and attitudes in the community. This organization takes credit for helping to develop the Virginia Department of Transportation (DOT) Policy for Integrating Bicycle and Pedestrian Accommodations.

Benefits of Bicycling for Transportation

As reported on the Better Health Channel, regular cycling can benefit health in the following ways:

The average price of a new car has gone up to $31,252 as of August 2014 and the average price of a gallon of regular unleaded gasoline was $2.29 as of December 2014, as stated in a 2015 U.S. News Money article. Bicycles cost relatively little to purchase and repair. They do not require fuel, and there is no mandatory minimum liability insurance required in order to ride a bicycle.

Particularly in congested, big city, rush hour traffic, many short trips can be made faster by biking than by driving. For longer trips, commuters can combine biking and transit.

Benefits to the Environment

Bicycles do not burn fossil fuel or pollute the air with emissions. Bikes require very little parking space, and the more they are used for transportation, the less land will have to be paved for parking lots.

Disadvantages of Bicycling for Transportation

As with most good things, there are some cons to consider in bicycling for transportation. Bike theft is a common concern among bicyclists and on the rise in Virginia Beach, as covered in an article in the Richmond Times Dispatch. In a single recent year, 189,428 bicycles were stolen in the U.S., per the FBI’s most currently available statistics.

The most serious disadvantage of biking is the risk of death or injury in a motor vehicle/bicycle accident. According to National Highway Traffic Safety Administration (NHTSA) statistics, 743 bicyclists were killed and 48,000 were injured in traffic accidents in 2013. A rider on a bicycle lacks the protection that passenger vehicles provide to occupants. When a 3,000 lb passenger vehicle collides with an unprotected bicyclist, the rider is likely to sustain very serious injuries.

If you have been injured in a traffic crash while bicycling, your best course of action is to consult with an experienced Virginia car accident lawyer. At Marks & Harrison, their attorneys are committed to holding negligent drivers accountable and to helping bike accident victims pursue the compensation they need and deserve.