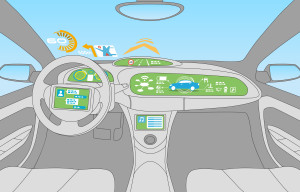 The big buzz in automobile talk is the autonomous car, which sounds like it comes straight from the pages of a futuristic novel. Although there has been a slow introduction, with the Google Car for example, technology experts are confident that the autonomous car will be a staple on our roadways by 2040. The driverless car creates many opportunities for individuals who are otherwise limited by mobility, such as older individuals who are unable to drive, people without a license, and individuals with disabilities.

While many supporters believe that there will be fewer cars on the roads with the use of the autonomous car, as families may only need one car, human reliance on vehicles remains which may continue to be bad news for the environment. How will the autonomous car impact our environment once they take over the road?

Any of today’s drivers will attest that maneuvering the roads can be a nightmare. From congestion to bad drivers to the hours and money lost while sitting in gridlock, it’s no wonder that many drivers are ditching their cars and looking for alternative modes of transportation. The autonomous car, however, is designed to make the roads less congested and with fewer emissions.

What Would Make Autonomous Cars Better?

Imagine a self-driving vehicle that reduces the number of accidents, transports people safely, and has zero emissions. While the technology already exists to make the autonomous car more eco-friendly, making it electric could make it the ultimate vehicle on the road. While it’s not clear whether or not automakers would be on board with an autonomous electric car, it could improve an already promising future for automobiles.